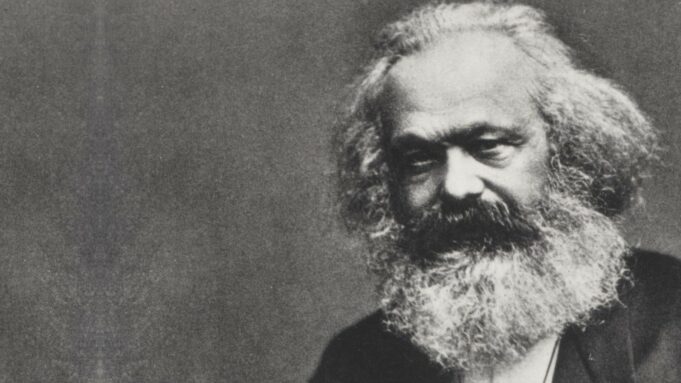 Marx  gives  us a theory of society and he regards  capitalism as extremely unsatisfactory l try to analyse his arguements on social ideals and implications for his action on Marxist theory about how our society works.

As many would appreciate Marxism is an economic and sociopolitical worldview and method of socioeconomic inquiry based upon a materialist interpretation of historical development as well as , a dialectical view of social change, and an analysis of class-relations within society and their application in the analysis and critique of the development of capitalism.

Karl Marx gives the idea that, while the cultivable powers and technology continued to process, socialism would finally  lead to a communist  stage of social development. Communism offers to be a “classless, stateless, moneyless” society depends on common ownership and the principle of “From one according to their ability, to one according to their needs”.

İn fact , Marxism encompasses aneconomic theory, a sociological theory, a philosophical method and a revolutionary view of social change. There is no one definitive Marxist theory; so Marxist analysis has been applied to a variety of different subjects and has been modified during the course of its development as a result of this   there are multiple Marxist theories.

Marxism can be explained something based  on a materialist understanding of societal development, taking at its starting point the necessary economic activities required by human society to provide for its material needs. The form of economic organization, or mode of production, is therefore understood to be the basis from which the majority of other social phenomena — including social relations, political and legal systems, morality and ideology — arise (or at the least by which they are greatly influenced). İn terms of social relations form the superstructure, for which the economic system thus  forms the base. As the forces of production  (most notably as  technologyitself ) in which it improves, existing forms of social organization thus  become inefficient and stifle further progress. These inefficiencies as a result may manifest themselves as social contradictions in the form of class struggle.

Marxists  evaluates that, class conflict in capitalism  while it grows up due to stepping up the conflicts between abundant mechanized and socialized production motorized by the proletariat, and private ownership and private appropriation of the excess product in the form of excess value (profit) by a less numbered of private owners called the bourgeoisie. As the conflict becomes quite seemed to the proletariat, social unrest between the two antagonistic classes gets high, resulting in  social uneasiness.

The final long-run result of this revolution would be the startup of socialism – an economic system based upon on private ownership of the ways of production, distribution based on one’s production, and production organized directly for use. Karl Marx states that, as the productive means and technology gets to advance, socialism would finally give way to a communist stage of social development. “Communism would be a classless, stateless, moneyless society based on common ownership  and the principle of “From each according to his ability, to each according to his needs”.

Marx may be thought of as having offered 2 sets of ideas, the primary of that we are able to settle for if we tend to want to, while not acceptive the second.

I guess very few people in western society today accept this as an obvious thing  second set of ideas; most may look  to think capitalism might be  desirable, and as a result most finally do not want to see it destroyed and to me it is rather obvious that most are not satisfied with the idea of revolution or communism.

One can settle for Marx’s ideas as being terribly helpful for the aim of understanding our society while not acceptive his condemnation of market economy, his political values or his recommendations for political action. In alternative words, if you are doing not believe Marxist social ideals and implications for action,then do not let this interfere together with your analysis of Marxist theory concerning however our society works.

Marx is claimed to be a “materialist”. Marx rebelled against Hegel’s philosophy within which concepts were taken to be the vital determinants of history. Marx argued that dominant concepts area unit the results of material or economic conditions and he was thus powerfully critical reformers World Health Organization thought that mere amendment in concepts will amendment society.

The main types of society Marx distinguished were in a way  primitive, slave, feudal and capitalist. In a capitalist society capitalists try to own and control the productive resources (i.e., capital itself ) and workers may thus own only their labour and work for capitalists, who then own the product and sell it at a profit.

The key to understanding a society at any purpose in historical context  is to focus initial on the mode of production. In social organization society land was the crucial productive issue and therefore the social organization lords in hand and controlled it. In capitalist society capital, machinery, mines, factories etc. square measure the key productive factors and these square measure in hand and controlled by capitalists (…as distinct from being in hand by all members of society, that is that the focal plan in styles of socialism).

The “forces of production” may be loosely regarded as the type of productive technology the society has; e.g., slave labour, machine technology…

The “relations of production” refers to the social structure of production; i.e., essentially UN agency owns the productive forces, or however they’re controlled. for example in an exceedingly slave society masters force slaves to try to to the work, and in an exceedingly structure society serfs area unit duty-bound to figure for the lord a particular range of days weekly. In capitalist society capitalists own society’s productive resources and use staff to control these for a wage once capitalists suppose profits may be created.

What l perceive is that the relation between the forces and also the social relations of production and also the consequences therefore   it generates the foremost dynamic consider history, i.e the first reason behind social amendment.

According to Marxists The history is basically about the struggle between classes for dominance. “The history of all hitherto existing society is the history of class struggles”.

Marxists stress that social analysis ought to specialize in social structure and relations. In different words the foremost vital inquiries to raise a few society square measure to try to to with what teams in society dominate or gain most enjoy the established order, or whose interests will true or policy or proposal serve most?

In capitalist society the capitalist category edges most; i.e., people who own and management the suggests that of production receive a disproportionate share of wealth, power, privileges and standing. There ar different categories however as time goes on these ar squeezed into either the little capitalist category or the big class.

There is also a distinction between business, which incorporates the international companies and banks, and tiny business. several tiny corporations and family farms and retailers square measure sometimes troubled, solely providing their homeowners can low incomes. These folks aren’t finance capital so as to form profits from enterprises within which they need no different stake, in order that they aren’t very a part of the capitalist category. they’re a lot of like peasants UN agency own and work on their own farms.

In historical context , Marx thought his theory of history was a serious action and one in all the 2 insights (along together with his theory of value) that established communism as a science. (However several suppose this is often quite mistaken which there are not any inevitable laws of history.)

Globalisation of nowadays in our nature represents monumental success on the a part of the companies and banks in having several of those laws and restrictions to their freedom eliminated, within the name of accelerating the liberty of enterprise and trade. All governments have thirstily expedited these processes, that doesn’t surprise Marxists as a result of they see the state as continually ruling within the interests of capital.

In Marxist terms globalization are often seen because the scenario to that laissez-faire economy inevitably leads, i.e., wherever the unceasing drive to accumulate a lot of and a lot of capital obliges capitalists to undertake to interrupt down all remaining impediments to investment, markets, resources, low cost labour and profitable business opportunities. globalization is concerning them having the ability to urge into and take over markets that they were antecedently unbroken out of by government regulation, particularly protection of native industries against low cost imports. many numerous poor folks within the accumulation are additional impoverished as a result of multinational companies ar currently ready to are available and take over the markets and resources that accustomed be preserved for the advantage of locals.

Globalisation and the neo-liberal agenda are gutting society, destroying the conditions on which are crucial for cohesion, such as valuing the public good, concern for the under dog and for society, and concern for the environment

Marxists argue that the state serves the dominant classes in society. The state is “the executive committee of the bourgeoisie”.

To sum up Marx  thought that late in the history of capitalism workers will develop clearer awareness of their situation and their interests, i.e., class consciousness will emerge. Workers will come to see that the prevailing social relations of production are not in their interests.claimed that the state will cease to exist when society becomes classless.

He is seemed to be having meant that the coercive apparatus,  will not be necessary because these function first to direct rules which benefit the dominant classes, but there will still be a need for bureaucracy to take care of organisation and planning.

During late years of his lifespan, Marx is thought  to think that a non-violent and non-industrial path to -communisn is possible to take place , through development of the traditional collective Soviet village.

I  think it is not  necessary to handle the long and arduous period of industrialisation and development of a middle class, increasing immiseration and final revolution.