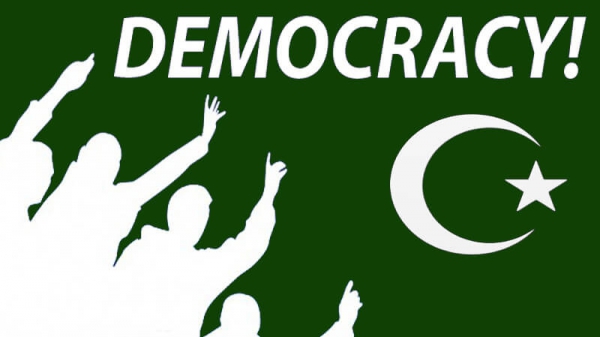 In an iconology book printed two centuries ago, democracy has been figured as a woman; a crown on her forehead made of vine leaves, shabby clothes on her, a pomegranate in her hand, and a snake in her other hand. Every age made the word tell their dreams, and desires; every demagog his/her deceits. A lot of blood has been poured in sake of it, like a flood. What is democracy?

Voltaire says: ”Pure democracy is despotism of hoi polloi.”. Montesquieu says: ”Fundamental of democracy is virtue.” De Maistre says: ”greediness” ; Vacherot:” Democracy is the basis of justice”. Proudhon says: “it is ending of all power either spiritual or corporeal.” To Thierry, the end of democratic republics is a moral descend.

Let’s come to today, According to a Weber follower sociolog.”the pre-supposition differing democracy from other political regimes is freedom.” Freedom has been present since the beginning of democracy, the freedom, unconditional, and not accepting a degree. This concept determines the aim of democracy, too: Equality. Equality cannot come true. If it comes true, democracy losses its cause of existence. It leaves its place to anarchy. To understand democracy and to decide on how they grow away from their core, we have to compare them with this pure type. (See, 1. Freund, “Le nouvel age”. Paris Riviere, 1970.)

In short, this is understanding of democray for contemporary Europe. Let’s take a glance at concept of state in İslam. Everybody is equal from birth. Equality in slavery and in transiency. But this is a negative equality. Later on, they acquire a new equality by means of belief. They become brothers and sisters. They will make use of from blessings of Allah (M.H.G.E.), equally: An equality, lawful and positive.

All the pride of a creature is in his/her being a believer. When a cerature becomes a believer, he/she gains a legal identity.  An identity which makes a begger and a caliph equal to each other.

Freedom is legal concept, but not a philosophical one, for İslam. Its fundamental is the belief that every indivudial of a society has equal rights, completely.

Tribes who have a divine book from Allah (M.H.B.E.) have been a limited and guaranteed right, on the conditions of accepting superiority of Islam and paying for jizya. This protection is magnanimity of islamic community. A kind of hospitality. Since people who have been protected have less duty, they have also less right. They can go on doing their worships, and act their rules.

Idol worshippers have no place in community. However, muslims have protected them time to time, as well. Every non-muslim and idolater has been included in the pact, as soon as he/she accepts Islam. Islam is a universal religion, and addresses all humans. It does not pay attention to caste. There would not be anything so called! “social class”, in a real muslim’s view. Wealth and rank cannot differ people from each other. A muslim is equal to a muslim. As Cevdet Pasha said:”Positions of the rich and the poor are the same and alike”. In Cami-i Şerif, there are total equality and excellent freedom. “A big distance cannot be seen between the poor and the rich”. Unlike christian states, there are no discrimination and hostility, either. Thus, among islamic tribes, there are no classes such as “commune”, “socialiste” and “nihiliste”. “To command” belongs to Allah (M.H.G.E.), but “to obey” belongs to all believers. Believers read the Quran, memorize it and regulate their behaviours according to it. There is a power or act, either religious or civilian. Authority belongs to Allah (M.H.G.E.), only. It has been executed by a means; administrator. Administrator has right of neither authority nor execution.

Civilization can only be formed by belief, not by earth and blood. “Islamic community” has no equivalent in European Languages. A political and religious bond. The Quran is either a worship book or a constitution. Its persons addressed are all the humans. (See: Gardet, “La Cite Musulmane”, Paris, Vrin, 1970).

That is to say that fundamental concept of Islam is equality. This is not an aim, but a right. Freedom is another name and vision of equality. Whose freedom against whom, in a religion which does not accept class, and privilege? The West defines freedom as a right to make a mistake. A muslim does not have such a right. Because, he/she is at infinitive, unique and universal truth behest.

Yes, Islam is a domination of act and order (Nomocracy). It achieved an equality which The West tried to do, so long ago. It accepted thought freedom as a means of remind and lightining, but not as an assault weapon which makes man attack another. Islam is just democracy, itself. However, a democracy, developed in spirit climate, much different from that of The West, and based on many different principles.