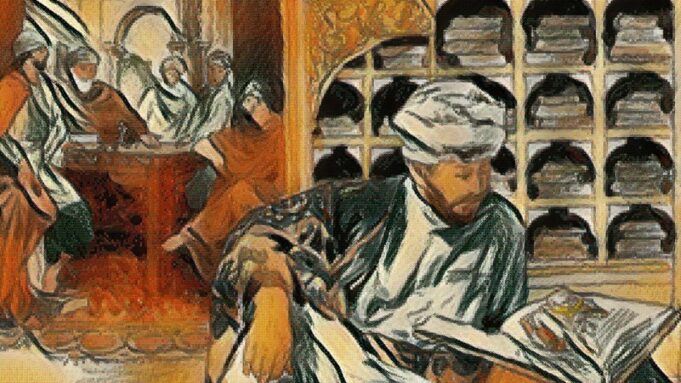 691 – 751 AH (1292 – 1350 CE )
His full name is Sham Al-din Muhammad Ibn Abi Bakr, Ibn al-Qayyim al-Jawziyya.  He was born in a village near Damascus, Syria in 691 A.H./1292 C.E, and he studied under his father’s surveillance  who was the local attendant (qayyim) of al-Jawziyya school.  Later on, he pursued his request for knowledge at the hands of well-known masters and scholars of his age, as well as he studied  the works and teachings of sufi masters known in his time.  His education centered around Islamic jurisprudence, divinity, and the study of prophetic practises.

In the year 712/ 1312 at the age of 21, he joined the study circle of Imam Ibn Taimiyyah who kept him in his company as his closest student and disciple, who later on became his successor.

Ibn al-Qayyim was overzealous in his devotion to his teacher, and he was an excellent student and disciple of the great Muslim scholar Imam Taqiyyu-Deen Ahmad Ibn Taimiyyah.  He was in behalf of his religious opinions and understandings,  and he compiled and published most of his works, and taught them  in the same way.

Because of their opinions, both the teacher and the student were unfairly persecuted, tormented, and tyrannized in public by the local authorities at that time, and they were imprisoned in a single cell, while other followers were kept separate in the central prison of Damascus, still known to-date as al-Qal’a. Among the imprisoned scholars, there also was a young man named Ibn Kathir who later on became as the most well-known Muslim scholar and compiler of the most inclusive Quranic commentaries ‘Tafsir Ibn Kathir.’

After  the death of Imam Ibn Taimiyyah, the followers  were set free from prison, and Imam Ibn al-Qayyim al-Jawziyya advanced his studies, and held study circles and classes for his own students.  Ibn Jawziyya taught Islamic Jurisprudence at al-Sadriyya school, in Damascus, before he held the post of the Imam of the Jawziyya school for a long time.  Most of his works were compilations, although he wrote several books himself, and manuscripts with his own handwriting are protected today in the central Library of Damascus.

It was really  accepted as an honor and a privilege to study in his classes. Among  the famous Muslim scholars who studied under him, we mention about Ibn ‘Abd al-Hadi and Ibn Rajab and others who attended his classes frequently, and looked for his company, such as Imam Ibn Kathir.

Most scholars of the time have acknowledged the author’s superiority, and deep knowledge of Quranic interpretation, commentaries on the prophetic practises, and divinity.  His extensive recognise  and understanding of Quranic commentaries exceeded even some well-known  theologists  in Islamic history.

Ibn Kathir spoke of him in his book called ‘Al-Bidaya wa-’Nihaya, saying: “He was most friendly and kind-hearted, he never begrudged  anyone, he never resulted in harm to anyone, he never bore prejudgement  against anyone, and I was the closest to his heart.  Moreover, I do not know anybody  who is more religious  in his worship than him in our time. ” A nearly the same opinion also was quoted by Ibn Hijr.

Ibn al-Qayyim provided to all the branches of Islamic science, and was specially known and praised for his commentaries.  Al-Hafiz Ibn Rajab spoke of his teacher,  saying: “He was an experienced  scholar of Islamic study, and no one could rival him in his deep understanding of the Qur’an and prophetic saying, and his explanations were incomparable  in exactness.”

Ibn Rajab reported that his teacher Imam Ibn al-Qayyim al-Jawziyya learned the science of prophetic sayings (Hadith) from al-Shahab al-Nabulsi, Qadhi Taqiyyu-Deen Sulaiman, and Fatima Bint Jawhar, among others.  During his early learning period, Imam Ibn al-Qayyim looked for  the company of most shaikhs of his period, and he was particularly talented in interpretation  the Hanbali Muslim school of thoughts.