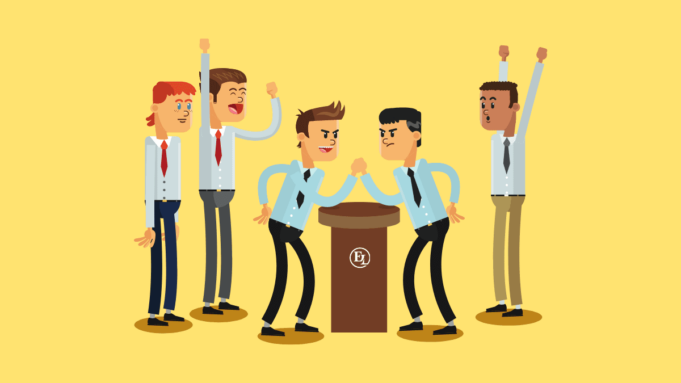 According to Niall Ferguson, competition is one of the so called six killer applications that West used to go beyond the “Rest”.

“Competition means, not only were there a hundred different political units in Europe in 1500, but within each of these units, there was competition between corporations as well as sovereigns. The ancestor of the modern corporation, the City of London Corporation, existed in the 12th century. Nothing like this existed in China, where there was one monolithic state covering a fifth of humanity, and anyone with any ambition had to pass one standardized examination, which took three days and was very difficult and involved memorizing vast numbers of characters and very complex Confucian essay writing.”

Competition is defined by Niall Ferguson as a decentralization of both political and economic life, which created the launch – pad for both nation states and capitalism.

It is sometimes argued that Western Europe’s very nastiness was a kind of hidden advantage. Because high mortality rates were espe­cially common among the poor, perhaps they somehow helped the rich to get richer. Certainly, one consequence of the Black Death was to give European per-capita income a boost; those who survived could earn higher wages because labour was so scarce. It is also true that the children of the rich in England were a good deal more likely to survive into adulthood than those of the poor.Yet it seems unlikely that these quirks of European demography explain the great diver­gence of West and East. There are countries in the world today where life is almost as wretched as it was in medieval England, where pesti­lence, hunger, war and murder ensure average life expectancy stays pitifully low, where only the rich live long. Afghanistan, Haiti and Somalia show little sign of benefiting from these conditions. As we shall see, Europe leapt forward to prosperity and power despite death, not because of it. This alone gives us a powerful insight why competition was so important.

Niall Ferguson than goes on by explaning the geographical explorations and how they helped the West to be more competitive and flourished a West dominance. Because, as a result of those explorations; European monarchs all encouraged commerce; conquest and colonization as part of their competition with one another. So, the politicial fragmentation that characrerized Europe precluded the creation of anything remotely resembling the other Empires. It also propelled Europeans to seek opportunities – economic, geopolitical and religious – in distant lands. You might say it was a case of divide and rule, excep that, paradoxically, it was being divided themselves that Europeans were able to rulet he world. In Europe, small was beautiful because it meant competition- and competition not just between the states; but also within states.

So; along with other things; this multi – level competition, between states and withing states – even with cities helps to explain the rapid spead and advancing technology of the mechanical clock in Europe. Already in the 1330s, Richard of Wallingford, had installed a remerkably sophisticated mechanical clock in the wall of the South transpet of St. Albans Abbey, which showed the motion of the motion of the moon, of the tides and of certain celestial bodies. With their distinctive hourly bells (hence the name; clock, clokke, Glocke, cleche) the mechanical clock and the spring – driven clock that supplanted it in the fifteenth century were not only more accurate than Chinese waterclocks. They were also intended to be disseminated, rather than monopolized.

Finally; to sum it up, Niall Ferguson claims that the competition was a very important reason of why England was able to surpass a great empire like China. China had no competition of whatsover, so it had no motivation to get up and change something or to go and explore. So; China stagnated and finally stopped developing.