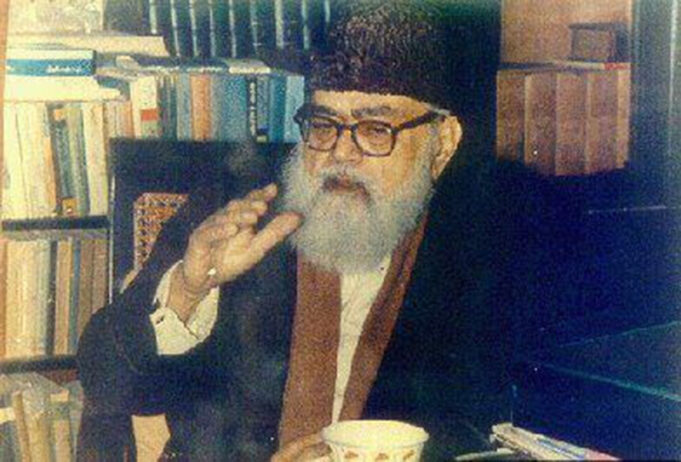 Abul Ala Maudidi was born in Aurangabad, Hyderabad Deccan, India  on 25 Sept 1903 and died in the United States,on 22 Sept 1979.  His surname can also be spelled as Maudoodi or Mawdudi or Modudi.  He was theologian,  a journalist, a muslim leader and a great thinker in India and in Pakistan.  He had a great role in politics in Pakistan and he was the first person who has taken the King Faisal International Award  for his services in 1979.  He has founded the Jamaat-al-Islami, the Islamic revivalist Party.

His father died when he was young.  Therefore, he faced the realities of life  at very early age.  He was very skillful and he chose  Journalism as his proffession.  He published some papers suh as “The Madeena” Bijnour, the “Taj” Jabal Pur  and organ of Jamiat Ulma Hind-al Jamiat from Delhi.  In Al-Jamia Dehli, he wrote honest, incisive, analytical and forward looking pieces.  He has been considered as the top journalist at that time.  Maulana  Muhammad Ali Johar offered him to write in his Daily Hamdrad, but Maududi rejected his offer.

Syed Maududi had been impressed by Iqbal’s poetry deeply at his chilhood.  He had taken a marvellous home education in his childhood.  Especially his father had taught him history of India.  His successful background helped him in his career. He hated foreign rulers especially the English.  He was interested in Muslims of India.  Therefore, he participated in the Khilafat Movement, Emigration from India Movement and the Satya Gera Movement.  He tried to correct Muslim Society’s wrong beliefs and political mistakes.  He believed that the Muslims could gain their might only if they follwed Islam in letter and spirit.  Jamiat Ulma-e-Hind entered into alliance, with Congress in 1925.  Then, Maududi resigned in protest as editor of the Al Jamiat to oppose the concept of one nation theory for both Hindus and Muslims.

Maududi accepted everything as “Muslim” if it obeys God by submission to His laws.  This term “Muslim” was not only for  the people who followed the religion of Islam, but also all the things that obeyed the rules of God in the universe.  If someone denies God is called Kafir (Concealer), he/she professes many deities.  In the universe eveything obeys the rules of God, and by this obedience all the mecanisms work regularly.  Therefore a man who denies God, he denies the perfect systems and called “non-muslim”.

According to Maududi, Islam is not a “religion” in the sense this term is generally understood.  It is a system beleaguering all fields of life such as, economics, politics, legistlation, humanism, health, science, literature, psychology, sociology and technology.  It is also a system which makes no discrimination in races, colours, languages, dignity and so on.  It desires to reach the heart of everybody.

The state would be an “Islamic Democracy” has to have three principles which are tawhid (oneness of God),  risala (prophethood),  and khilafa (caliphate). Such a state takes care of all human beings  and their needs.  No one can consider any field of his/her affairs as private and personal.

Tariq Abdelhaleem on His War